Bhopal is known as the City of Lakes. But it takes the right kind of education to understand how to use these lakes efficiently to make Bhopal one of the greenest cities in India.

Good schools in Bhopal are not few or far between, but finding the best school in Bhopal was formerly considered to be a daunting task. Well, look no further as the capital of Madhya Pradesh is witnessing the rise of a giant as far as holistic education is concerned.

There are a plethora of established schools in Bhopal. Year on year, the convents and the public schools alike, churn out batches of students that have excelled in the real world.

The only hiccup in their strategy, their ability to adapt to the changing scenario in the market of the future. The schools that are considered to be good schools in Bhopal are not doing enough to continually alter their methods to benefit the students of tomorrow. 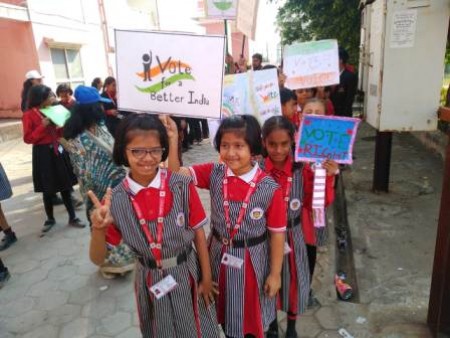 While education in Bhopal continues to run along the same course that it always has, this strategy is slowly but surely causing our youth to lose out on opportunities that they are entitled to, based upon their caliber.

Students from tier one cities like Mumbai and Delhi, though possessive of a shorter range of aptitude are exploiting career breaks on account of being part of ever evolving methods of education. Our students too need this boost in their foray into the real world based upon their being a part of a great institution.

At Asia Pacific International School, we intend to do just that.

With admission for schools for the academic year 2022-23 being just around the corner, we understand that making the right choice to see that your child is placed on the launch pad to success is of prime importance.

Here at Asia Pacific International School we take the formative years of a child's education very seriously. We understand the fact that, if a child's base is strong, the child is set up for a better grasp of the complexities of the subject in the later years of study.

In this regard and unlike in other institutions in Bhopal, education in primary and secondary-school are given equal importance.

Trying to introduce a fundamentally complex subject like calculus in the final years of secondary education, just because the child is old enough to understand it is useless as the child's base needs to be built up to properly grasp the subject and all its nuances. Attempting to learn with a half-baked base makes for poor application of the learnings in later life.

For the quality of education that is being doled out in schools today, CBSE school fees in Bhopal appear to be too heavy.

We at Asia Pacific International School have found the right balance between the kind of education we impart and what you will pay for the highest quality of education that your ward can receive in Bhopal.

Childrens Day was celebrated with great enthusiasm at APIS.Teachers performed solo and group dances and sang songs to bring smiles on the faces of their students.